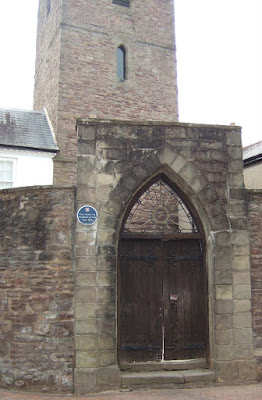 Morgan Lewis was the father of St David Lewis. Although he was of an old Catholic family, Morgan was a Protestant. He was a kinsman of the Morgans of Skenfrith in Monmouthshire. St John Kemble’s mother, a Catholic, was one of the Skenfrith Morgans, as was her relative, Fr William Morgan S J. Fr Morgan, who died in 1667, succeeded Fr John Salisbury (John Parry) as Superior of the Jesuit Mission in Wales.
Morgan Lewis and his wife, Margaret Pritchard, had nine children. Margaret was a devout Catholic and she brought eight of their children up as Catholics. However, Morgan had his youngest son, David, brought up in the Protestant religion. Morgan’s adherence to the Established religion may have been quite genuine and it is not for us to judge a man’s conscience. On the other hand, it could have been for practical purposes.
Morgan was the headmaster of the Royal Grammar School (King Henry VIII School) in Abergavenny. During his father’s headship, David was educated there. It certainly would have been advantageous, if not downright necessary, for Morgan and young David to follow the Protestant religion.
King Henry VIII Grammar School was one of many founded from property seized from monasteries and religious houses during the Reformation. Before King Henry’s break with Rome, the Royal Grammar School had been the Parish Church, St John’s. With the King’s sweeping changes, the Priory Church became the Parish Church and in 1542 the old St John’s Catholic Church became the town’s Grammar School.
Dr David Lewis, whose tomb is in the Priory Church, was a great great uncle of St David Lewis. Dr David Lewis, a former pupil of King Henry VIII Grammar School, went on to become an advisor to Queen Elizabeth I, a Judge of the High Court of Admiralty, an M P, and the first Principal of Jesus College, Oxford.
The esteemed Benedictine writer, Dom Augustine Baker, was the nephew and Godson of Dr David Lewis and the great uncle of St David Lewis. Augustine (David) Baker recommended many Catholic children to King Henry VIII Grammar School under the headship of his niece’s husband, Morgan Lewis.
In 1898, a new school was built in Penypound. The Grammar School that had been a Catholic Church then became a Freemasons’ Lodge!
The altar stone of St John’s Church was discovered by Fred and Iltyd Gardner walled up in a chimney breast of the “Cow Inn” in Neville Street, Abergavenny. They presented it to Holy Trinity Church in Baker Street where it was incorporated into the altar. An ancient piscina was found in the wall of the north transept of the old St John’s Church. The piscina was presented to Holy Trinity Church by the Worshipful Master and Brethren of the St John’s Lodge of Freemasons.
Catholic Church, Royal Grammar School, Freemasons’ Lodge, this storied old building still stands. I can’t help but wonder what Morgan Lewis, who converted to Catholicism before his death in 1638, would make of it all?
Posted by breadgirl at 23:20 No comments: