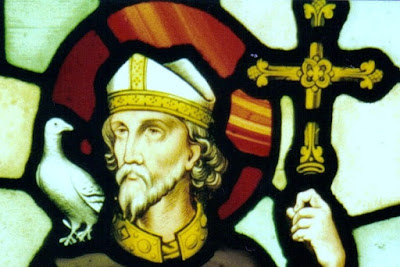 1st March is a very special day. It is the day on which all red blooded Welshmen (wherever they are) celebrate the feast of their Patron Saint, St David. At the special St David’s Day Mass today, the schoolchildren will be decked out in something typically Welsh. There will be a sea of red Welsh Rugby Shirts, yellow daffodils, tall black Welsh Hats, Leeks and Red Dragons! The children always make their own special contribution to the Mass with their singing and readings. All in all, the St David’s Day Mass is lovely and the presence of the children makes it even lovelier!
Legend has it that St David of Wales was born around 462. He was the son of a chieftain in Cardigan and St Non. He was baptised by St Ailbe, Bishop of Munster.
Sometime after David was ordained a priest, together with three disciples, he went to a place called Hodnant in Welsh. In Irish it was known as Mynyw. It is now called St David’s and there they founded their monastery. The Rule David drew up for himself and his monks was exceedingly strict. David acquired the nickname ‘Dewi Ddyfrwr’ or ‘David the Waterman’, because of his daily practice of immersing himself in cold water for long periods of prayer!
The fame of David’s sanctity soon attracted many followers. He died on 1st March, but the year is not certain. As he lay dying, David admonished his monks, “Brothers, be joyful and keep the faith. Do those little things you have seen and heard from me.” He was buried in his own church and his shrine became a popular pilgrimage site. In mediaeval Britain, for penitential purposes, two pilgrimages to St David’s were equal to one pilgrimage to Rome. In the year 1140, William of Malmesbury stated that Pope Callixtus granted the same indulgence to those who went twice to St David’s as to those who went once to Rome.
Today, St David’s Shrine may be found in the beautiful St David’s Cathedral, built on the site of his former monastery. Over the centuries, the original shrine was desecrated several times and, during the Reformation, destroyed. In the 1800s some bones, thought to be the saint’s, were discovered under the floor of Holy Trinity Chapel. They are now in a splendid oak casket and pilgrims still come to honour the Patron Saint of Wales.
Posted by breadgirl at 01:07