THE GUNTERS OF ABERGAVENNY 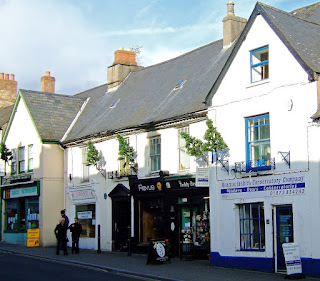 James Gunter, of a Breconshire family, was a London lawyer who speculated in Abbey lands. In 1546 he bought the Abergavenny Priory and its demesne. Robert Gunter was his son. Robert’s elder son was Walter Gunter of the Priory who, in July 1645, entertained King Charles I when he visited Abergavenny. Walter represented the Protestant branch of the family. Robert’s second son, Thomas, was a Catholic. His house in High Street was sequestered for recusancy in 1648. He was allowed to remain in his house as a tenant because of his age (approximately 79) and poverty. Some sources say his wife was Mary, a sister of St David Lewis. Thomas Gunter’s son, Thomas Gunter Junior, was an attorney who lived in a mansion on Cross Street. Another prominent Catholic Gunter was Richard Gunter, a capital burgess of the town and brother of the recusant Thomas Gunter. A Mary Gunter (Waun Mary Gunter Farm) had her farm and lands confiscated because of her Catholic faith.

Thomas Gunter Junior was probably a nephew of St David Lewis although some say he was a cousin. A staunch and fearless Catholic, he had a chapel in the attic of his 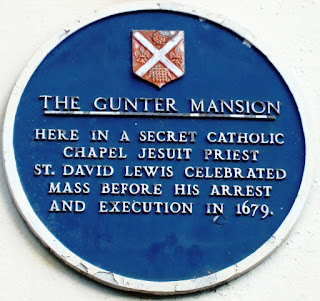 home on Cross Street. Witnesses claimed that more people attended Mass there than attended services at the established church. Two priests who were known to say Mass at Thomas Gunter’s were the Jesuits, Fr Philip Evans and Fr David Lewis. Both priests were martyred for their faith in 1679 and canonised by Pope Paul VI in 1970.

Thomas Gunter’s house on Cross Street was a fine large house, fitting to one of his family and position. Originally, the back of the property faced Cross Street and the other side, facing Priory Lane, was the front, with a large court enclosed by thick walls. In his deposition to the House of Commons in 1678, John Arnold, vicious priest hunter, stated that he had seen the “mark of the Jesuits” on the outside of Gunter’s property. The Vicar of Abergavenny, Mr Greenhaugh, said “there is a publick mark of the Jesuits on the outside of the building, which is directly towards the Parish Church.”

The last of the Gunters to live in the Cross Street house was a Walter Gunter who was known to be living there in 1717. Over the years, the large house was divided into four smaller ones. In 1908, Mr & Mrs Foster, the owners of the end house, were carrying out alterations when an amazing discovery was made. When the workmen began to demolish the partitions dividing the rooms in the attic, they discovered a secret room behind the end room in the north end of the house. On the sloping ceiling was a beautiful fresco depicting the ‘Adoration of the Magi’. This was most likely the altar piece and would have had the altar positioned below it. Mrs Foster had the painting photographed by Mr Bailey the Photographer, of High Street, Abergavenny. She then had the fresco carefully removed and, in an attempt to preserve it, had it placed behind glass and framed. For many years the painting was in private hands but, thankfully, it is now on display at Abergavenny Museum. The “mark of the Jesuits” was found here, too. The letters I H S, within rays and surmounted by a cross, were clearly visible above the window looking out onto Cross Street.

When the attic floor boards were removed, a quantity of papers was discovered. The dates on the papers ranged from 1674 to 1697 and some bore the name of Thomas Gunter. The writing on one of them said “Thomas Gunter, Attorney at Law”. These manuscripts are now in the possession of Abergavenny Museum.

On closer inspection of the outside of the old house, they found traces of a staircase leading from the chapel down into the garden. However, the “mark of the Jesuits” referred to by John Arnold and Mr Greenhaugh could not be found.

Today, shops occupy Thomas Gunter’s grand mansion on Cross Street. The only reminder of the good and heroic people who 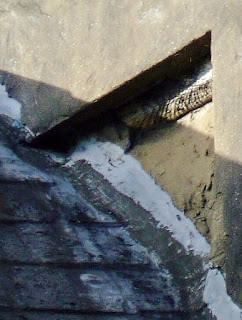 lived and worshipped there is a blue Local History Society plaque on the front of the building. If one goes to the back of the building, at the pine end of the house, it is still possible to see, just above the roof of the adjoining property, part of the lintel of a doorway. This was the entrance to the attic chapel at the top of the outside staircase of which traces were found in 1908. If you are able to disregard the Satellite Dish, it is almost possible to picture the Catholics of Abergavenny climbing that staircase to attend Holy Mass celebrated by St Philip Evans or St David Lewis. An awesome thought indeed!
Posted by breadgirl at 12:55

Email ThisBlogThis!Share to TwitterShare to FacebookShare to Pinterest
Labels: John Arnold, mark of the Jesuits