THE FAMILY OF ST DAVID LEWIS 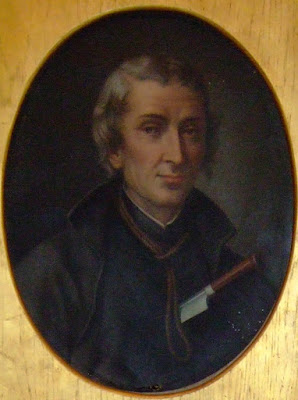 St David Lewis, SJ, was born in Abergavenny in 1616. His family was prominent and, although not too much is known about most of them, it is possible to piece together a picture of just who some of them were and the part they played in the life and times of the area, particularly Abergavenny.
DAVID HENRY LEWIS, (Alias Charles Baker) was born in Abergavenny in 1616, one of nine children. David was the only one of the nine to be brought up in the Protestant religion.
Father, MORGAN LEWIS, a kinsman of the Morgans of Skenfrith, one of whom was the mother of St John Kemble. Morgan Lewis was the headmaster of King Henry VIII Grammar School in the town. He was a Protestant and he brought up his son, David, in that religion. About 1636, Morgan Lewis was reconciled to the Catholic Church. He died of fever in 1638.
Mother, MARGARET PRITCHARD, a devout Catholic who brought up her other eight children, four sons and four daughters, as Catholics. By 1638, only David, who, as a young man, had converted to Catholicism, and two of Margaret’s daughters remained Catholic. Margaret died of a fever in 1638.
Brother, RICHARD LEWIS, father of the Saint’s Jesuit nephew and namesake, Fr David Lewis S J.
Sister, MARY, wife of Thomas Gunter Senior and mother of Thomas Gunter Junior who kept Frs Philip Evans and David Lewis at his house in Cross Street. (It is believed that under James II, the Franciscans opened a mission in Abergavenny, financed by Thomas Gunter’s daughter.)
Uncle, FR JOHN PRITCHARD, S J, (alias Lewis) the Saint’s mother’s brother, was only six years older than David and he numbered him among his closest friends.
Aunt, LADY FRANCES MORGAN of Llantarnam Abbey
Grandfather, HENRY PRITCHARD, Gentleman, was the father of Margaret Lewis.
Grandmother, MARGARET BAKER, granddaughter of Lewis Wallis, Vicar of Abergavenny, was fined for recusancy in 1608. She was the mother of Margaret Lewis and the niece of Dr David Lewis.
Great Grandfather, WILLIAM BAKER, Steward to Lord Abergavenny, was the grandfather of David Lewis's mother.
Great Grandmother, MAUD LEWIS, daughter of Lewis Wallis, Vicar of Abergavenny
Great Great Grandfather, LEWIS WALLIS, Vicar of Abergavenny
Great Great Grandmother, LUCY, daughter of Llewelyn Thomas Lloyd of Bedwellty
Great Uncle, DAVID BAKER, who became famous as the great Benedictine mystic and writer, DOM AUGUSTINE BAKER. On his last visit to Abergavenny in 1620, he stayed with his sister, Margaret Pritchard, and it is more than probable that he would have seen her young grandson, the son of Margaret and Morgan Lewis, the future priest and martyr, St David Lewis.
Great Uncle, RICHARD BAKER, (possibly a lawyer), was the eldest son of William Baker, brother of Dom Augustine Baker and of David's grandmother, Margaret Pritchard.
Great Great Uncle, DR DAVID LEWIS, was the eldest son of Lewis Wallis, and brother of Maud Baker, great grandmother of St David Lewis. Dr David Lewis was the first Principal of Jesus College, Oxford.
Nephew, FR DAVID LEWIS, S J, son of Richard Lewis, was born in Monmouth and educated at St Omer. He entered the English College in Rome in 1690. In 1707 he was professed as a member of the Society of Jesus. He lived and worked in Rome where he died in 1741.
Nephew, THOMAS GUNTER JUNIOR, an attorney and Justice of the Peace, was the son of Mary, daughter of Morgan Lewis of Abergavenny. He had a secret Catholic chapel in his house on Cross Street, Abergavenny.
Relative, ST JOHN KEMBLE, possibly a cousin as Morgan Lewis was a relative of John Kemble’s mother.
Relative, NATHANIEL PRITCHARD, a wealthy haberdasher and hat seller and a prominent citizen of Abergavenny. He was fined for recusancy in 1624 and, under the Commonwealth, his estate was confiscated for recusancy.

As in most, if not all, families, a bad apple or two finds its way onto the family tree. The family of the last Welsh Martyr, St David Lewis, also sprouted at least one piece of rotten fruit - MAYNE TROTT. Fortunately, it was only a tenuous link! It is said that Mayne Trott had married a relative of David Lewis and, after her death, he went to London. He found a position at Court but he was eventually dismissed for bad conduct.
Posted by breadgirl at 12:29