Usk, in South East Wales, is a pretty and historic little market town of about 2,500 people. As the sunshine encourages us to head off on holidays or day trips, a visit to Usk would definitely prove to be enjoyable. For the pilgrim, in this 40th Anniversary year of the canonisation of St David Lewis, a visit to the places associated with the martyred Welsh Jesuit should be seriously considered. But for you bloggers who are unable to do this in person, come with me on a virtual pilgrimage in the final footsteps of the Last Welsh Martyr, St David Lewis. (MOST OF THE PHOTOS WILL ENLARGE IF YOU CLICK ON THEM.)

On 13th January 1679, Jesuit priest, Fr David Lewis (alias Charles Baker) was transferred from Monmouth Gaol to the Gaol at Usk, ‘The Old Bridewell’ or ‘House of Correction’. This was on the north side of Bridge Street and, at that time, many of the Catholics to whom Fr Lewis ministered were also incarcerated at Usk for refusing the Oaths of Allegiance and Supremacy. Ironically, this Old Bridewell had originally been a Friary, a house of the Grey Friars. The first two photos show the site of the old Gaol.

On 27th August 1679, Fr David Lewis was taken from Usk Gaol and bound to a hurdle, feet uppermost and his head to the ground. He was carried along the path by the river to the place of execution, the Island or the Coniger. The photos are of the river path today and of a sign along the path which directs one to the plaque marking the place of execution.

Fr David Lewis had the love and respect of many and it was a Protestant man who prevented the priest from being mutilated while still alive. On or near this spot, the priest was hanged but this unnamed Protestant held his hand until he was dead, thus ensuring that Fr Lewis was not cut down while still alive to suffer the agony of disembowelling. The body was decapitated and mutilated but not quartered. The plaque in this photo is in the grounds of Porth-Y-Carne House. Porth-Y-Carne House is a private residence but the plaque is visible from the roadway beside it.

This group of photographs shows:
1) The Catholic Church of St David Lewis and St Francis Xavier which is opposite Porth-Y-Carne House. The church was originally dedicated to St Francis Xavier but in 1974 it was rededicated and now honours the Jesuit who was martyred near the spot in 1679.
2 & 3) The broken and cracked gravestone, believed to be the original, which was removed from the Saint’s grave at Usk Priory Church. This old stone is outside and to the right of the Catholic Church.
4, 5 & 6) Inside the Catholic Church, an explanatory notice, the Martyr’s Shrine and the colourful, modern stained glass window depicting the church’s two Jesuit patrons, St Francis Xavier and St David Lewis. 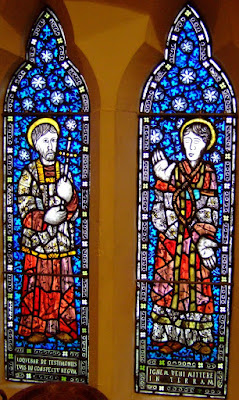 The Jesuit’s body was taken in procession to Usk’s Priory Church of St Mary and respectfully buried in the churchyard. His grave is the one nearest the door of the west porch and just to the left of the path as you approach the church. The stone marking the grave is relatively new, having been placed there after the canonisation of St David Lewis. It replaces an old and broken stone generally believed to be the original gravestone. The Priory Church West porch and the Martyr’s gravestone are in the next photographs.

In Penal Times, Mass was celebrated whenever and wherever possible. This could mean in a private house, an inn, a barn, in a field, or in the woods. After the execution of Fr David Lewis in 1679, a house in Usk where he used to say Mass was confiscated. The popular Pub, Cross Keys, is thought to be that house. It is located on Bridge Street, not far from the site of the former Usk Gaol.

Fr David Lewis was beatified in 1929 and on 25th October 1970, he was canonised by Pope Paul VI as one of the Forty Martyrs of England and Wales. His feast day is kept on 27th August. Every year on the Sunday nearest to the 27th August, there is a pilgrimage to the grave of St David Lewis. 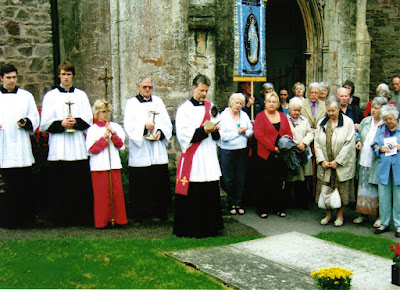 ST DAVID LEWIS, PRAY FOR US
Posted by breadgirl at 11:05