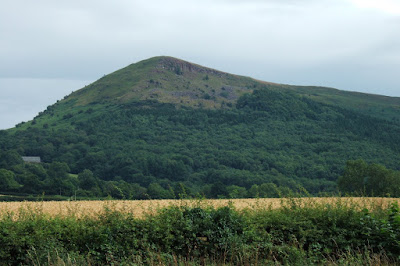 Devotion to St Michael the Archangel spread from Brittany to Wales in the 8th century. Churches dedicated to St Michael abound. Interestingly, many of these churches are associated with hills or mountains. One such place is Ysgyrid Fawr (Great Skirrid) in the Black Mountains of Wales. Ysgyrid Fawr lies on the outskirts of Abergavenny, the birthplace of St David Lewis. Ysgyrid Fawr is also known as ‘The Skirrid’, ‘The Holy Mountain’ or ‘St Michael’s Mount’.
At its highest point, St Michael’s Mount rises to 1,595 feet. It is here that one finds vestiges of a mediaeval Catholic Chapel dedicated to St Michael. Centuries ago, Catholics of the area struggled up the rough path on Good Friday and on 29th September, the feast of St Michael. There is not much left of the ancient chapel now but the sharp eyed will discern hints of its presence. 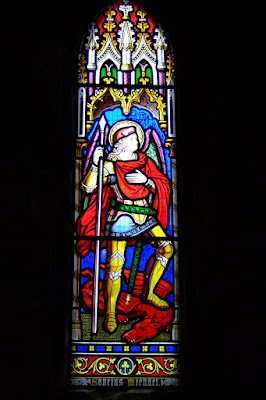 Even during Penal Times, Catholics were known to attend Mass and other services amid the ruins of St Michael’s Chapel. St David Lewis led Catholics there for the annual Michaelmas Pilgrimage. At that time, the altar was still intact. All of this must have been a very bitter pill for John Arnold to swallow. From his home, Llanvihangel Court, this rabid anti-Catholic and priest hunter could see the Catholics at their devotions atop the Holy Mountain. In 1680, in his Examinations as to Popery in Monmouthshire, Arnold stated that: “He hath seen a hundred papists meet on the top of an high Hill, called St Michael’s Mount, here is frequent meetings eight or ten times in the year, as he is informed. Mass is said, and sometimes Sermons are preached there. Mr John Scudamore of Kentchurch also deposed that:- He saw very great numbers of people at their Devotion on top of a high hill in Monmouthshire called St Michael’s Mount, where there is a ruinous Chappel and a stone with crosses on it, which he took to be an Altar and that he hath seen people with Beads in their hands kneeling towards the said stone, both within and without the Chappel and he has been informed that Mass is often said there.”
The Catholic Church of Our Ladye and St Michael, Abergavenny, possesses a *rescript of Pope Clement X. This rescript, dated three years before the martyrdom of St David Lewis, reads: “Pope Clement X grants a Plenary Indulgence to those who devoutly visit the Chapel of St Michael on the Skirrid Fawr on 29th September-Michaelmas Day. Anyone making this Pilgrimage and wishing to gain the Indulgence is required, first, to go to Confession and Holy Communion, then, on the Holy Mountain itself, to pray for peace among Christian Princes, for the rooting out of heresies, and for the exaltation of Holy Mother Church. Given at St Mary Major’s, Rome, under the Seal of the Fisherman, on 20th June 1676 and valid for seven years.”
St Michael’s Mount has belonged to the National Trust since 1939 and, with its magnificent views and ancient history, it is much favoured by hikers. It is said that Rudolph Hess, Hitler’s deputy, used to walk there when he was held at nearby Maindiff Court during WWII.
What of the pilgrims? Do they still come? Indeed they do! Every September, St Michael is honoured on his Feast Day as pilgrims wend their way to the summit, to the site of the ancient chapel where their ancestors risked danger and even death to remember Michael the Archangel and to practise their cherished Catholic faith.
*an ecclesiastical ruling - a formal reply by the pope or some other high dignitary of the Roman Catholic Church on a matter of doctrine or discipline
(CLICK ON THE PHOTOS TO ENLARGE THEM)
Posted by breadgirl at 00:18